Comparative mythology is the comparison of myths from different cultures in an attempt to identify shared themes and characteristics.[1] Comparative mythology has served a variety of academic purposes. For example, scholars have used the relationships between different myths to trace the development of religions and cultures, to propose common origins for myths from different cultures, and to support various psychological theories.

The anthropologist C. Scott Littleton defines comparative mythology as "the systematic comparison of myths and mythic themes drawn from a wide variety of cultures".[1] By comparing different cultures' mythologies, scholars try to identify underlying similarities and/or to reconstruct a "protomythology" from which those mythologies developed.[1] To an extent, all theories about mythology follow a comparative approach: as the scholar of religion Robert Segal notes, "by definition, all theorists [of myth] seek similarities among myths".[2] However, scholars of mythology can be roughly divided into particularists, who emphasize the differences between myths, and comparativists, who emphasize the similarities. Particularists tend to "maintain that the similarities deciphered by comparativists are vague and superficial".[3]

Comparative approaches to mythology held great popularity among eighteenth- and nineteenth-century scholars. Many of these scholars believed that all myths showed signs of having evolved from a single myth or mythical theme.[4] For example, the nineteenth-century philologist Friedrich Max Müller led a school of thought which interpreted nearly all myths as poetic descriptions of the sun's behavior. According to this theory, these poetic descriptions had become distorted over time into seemingly diverse stories about gods and heroes.[4] However, modern-day scholars lean more toward particularism, feeling suspicious of broad statements about myths.[5] One exception to this trend is Joseph Campbell's theory of the "monomyth", which is discussed below.


Comparative mythologists come from various fields, including folklore, anthropology, history, linguistics, and religious studies, and they have used a variety of methods to compare myths. These are some important approaches to comparative mythology. 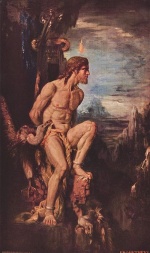 Prometheus (1868 by Gustave Moreau). The myth of Prometheus was first attested by Hesiodus and then constituted the basis for a tragic trilogy of plays, possibly by Aeschylus, consisting of Prometheus Bound, Prometheus Unbound and Prometheus Pyrphoros