The fall of Rome conventionally marks the beginning of European history, but Europe did not develop wholly in isolation. It was one of three great societies that emerged after the breakup of Mediterranean civilization. Byzantium and the world of Islam, were, like medieval Europe, heirs to the broader culture that had been consolidated and refined by centuries of Roman rule. They developed along radically different lines, but each exerted a powerful influence on Western civilization.

The wars of the fifth century were struggles between various barbarian armies for control over the remains of the western empire. In 476 the Ostrogothic general Odoacer (c. 433-493) deposed the emperor Romulus Augustulus and was recognized by the eastern emperor as his viceroy. This event is known conventionally as the fall of Rome, but the western empire had long since ceased to exist. Vandals ruled Africa, Visigoths governed Spain, and Gaul was now divided into a variety of jurisdictions ruled by Franks, Burgundians, and other tribes. Italy was given over to the Ostrogoths, but their rule was not destined to last. In one final effort to reunite the empire, the eastern emperor Justinian "the Great" (reigned 527-565) conquered North Africa from the Vandals and mounted a campaign for the recovery of Italy. Assisted by his wife, Theodora (c. 497-548), a former actress and prostitute who was his equal in political skill and his superior in courage, Justinian sought to rebuild the empire of Constantine. He accomplished much, including the building of the great church of St. Sophia at Constantinople and the long overdue codification of Roman law, but his attempts at reunification failed. He was the first of the Byzantine emperors.

In the midst of political turmoil, the church in the west continued to expand. As St. Augustine (354-430) pointed out in his book The City of God, no essential connection existed between the kingdom of Heaven and any earthly power, and Christians should leave politics alone if they valued their souls. Augustine was bishop of Hippo, near Carthage, and his view grew naturally from the suspicion of political authority that had been characteristic of the African church. He was also the friend and convert of St. Ambrose. The City of God, completed in 426, was written in response to the first sack of Rome. In it, Augustine argued that two cities have been formed by two loves: the earthly by love of self, even to the contempt of God; the heavenly by the love of God, even to the contempt of self. The earthly city must inevitably pass away as the city of God grows. In practical terms, this implied that the authority of the church must eventually supersede that of the state, though ideally church and state should cooperate for the greater protection of the faithful. Augustines work lies at the root of medieval political thought and reflects the growing gap between western and eastern concepts of the churchs role. That gap was further widened by the evolution of the papacy. The early church recognized four patriarchs, bishops whose authority exceeded that of the others. They ruled the dioceses (ecclesiastical districts) of Rome, Constantinople, Alexandria, and Antioch. Of these, the bishop of Rome was most venerated, though veneration did not necessarily imply obedience. The erosion of political authority in the west and the removal of the capital to Constantinople caused the popes, notably Innocent I (served 402-417) and Leo I (served 440-461), to claim universal jurisdiction over the church and to base their claims more firmly upon the doctrine of apostolic succession. Such claims were contested, and the Council of Chalcedon greatly annoyed Leo by granting the patriarch of Constantinople primacy in the east, but papal claims were based to some extent on political reality.

Throughout the dark years of the fifth century, the popes often provided leadership when the imperial office failed. Intellectually, too, the western church continued to flourish. In addition to The City of God, St. Augustine elaborated on a concept of sin and grace that was to have a long-lasting impact on Western thought. He was moved to write on this subject by the teachings of Pelagius, a Briton who believed in unlimited free will. Pelagius argued that a Christian could achieve salvation simply by choosing to live a godly life. Augustine, whose early struggles with sin are chronicled in his Confessions, claimed that human nature was so corrupted by its Fall from the Garden of Eden that salvation was impossible without God's grace and that grace is given selectively. His concept of the church, its sacraments, and even his view of history were widely accepted in the Middle Ages and remain influential among Christians today.

Perhaps the most striking feature of Christian life in the later Roman Empire was the spread of monasticism. Most of the world's great religions have produced, at one time or another, men and women who dedicate themselves to a life of religious devotion away from the distractions of the secular world. In Christianity, this impulse first surfaced when the church began to change from a persecuted congregation of believers to a universal faith. (...) Ordinary mortals, however devout, needed the support and discipline of a community that shared their goals. He therefore organized the first formal congregations of hermits and gave them a rule that became the basis of all subsequent monastic institutions in the west. The monks were to live in common and divide their time between work and prayer. Poverty and chastity were assumed as essential to a life lived in imitation of Christ, and obedience was regarded as a natural part of communal living. During the age of Constantine, monasteries, some of them with congregations numbering in the thousands, sprang up throughout Egypt, Palestine, and Syria. Women were as attracted to the movement as men. Athanasius (c. 293-373), bishop of Alexandria and energetic opponent of the Arians, spread the gospel of monasticism during his travels in the west, and by the end of the fourth century, the institution was solidly established in every part of Europe. (...) The chaos of the fifth century may have enhanced the attractions of monastic life, but monasteries were not as isolated from the world as their inmates might have wished. Many, if not most, houses were established in rural areas whose populations were imperfectly Christianized. Monks surrounded by pagans were obligated to attempt their conversion, and the monasteries became centers for the spreading of the faith. Each community, moreover, had to be supported economically.

Peasants attached themselves to nearby convents and monasteries in much the same way that they became tenants of the great secular estates and for many of the same reasons. The larger foundations became latifundia in their own right. Abbots and abbesses mastered the art of administration and exerted a substantial influence on regional politics. But monasticism made its greatest contributions in the intellectual realm. In a world of declining literacy, monasteries remained the chief purveyors of education and the heart of whatever intellectual life remained. Their libraries preserved the Latin classics for a later, more appreciative age. The heart of monastic life was the rule that governed the lives of monks or nuns.

The growing importance of monasticism was only one of the ways in which late Roman society began to foreshadow that of the Middle Ages. It was above all increasingly Christian, though the western church had long since begun to diverge in organization and practice from its eastern counterpart. It was also agrarian and generally poor. Though small freeholds continued to exist in Italy, Frankish Gaul, and elsewhere, much of the countryside was dominated by self-sufficient estates worked by tenants and defended by bands of armed retainers. An increasing number of these estates supported monasteries. (...) By the end of the fifth century, the Mediterranean unity forged by Rome had ceased to exist. A distinctively European society, formed of Roman, Celtic, and Germanic elements, was beginning to emerge. 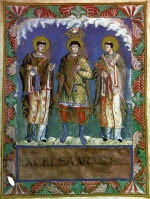 Coronation of an idealised king, depicted in the Sacramentary of Charles the Bald (about 870)