Financial crisis is a broad term applied to certain events in which some economic institutions or resources abruptly drop a large part of their value. In the 19th and 20th centuries, many financial crises were linked to banking runs, stock crashes and recessions, coinciding or not with these panics. Other situations that are regularly called financial crises include stock market crashes and the bursting of financial bubbles, currency crises, and sovereign defaults. While many economists have offered several hypothesis about the causes and solutions for financial crises, there is little consensus and these events are still usual events in all countries.

A short list of some major financial crises since 20th century:

1920 - The president was President Warren G. Harding, who ran for the Republican Party against James M. Cox and his VP candidate, the young Franklin D. Roosevelt. Warren G. Harding was elected to bring back order after World War I, with apposite policies to the unpopular previous socialist govern of Woodrow Wilson. His policy was based on Reduce spending and taxes. His policies – approved for a favorable congress – ended the recession after one year.

“Before the massive government interventions of the 1930s, all recessions were short-lived. The severe depression of 1921 was over so rapidly, for example, that Secretary of Commerce Hoover, despite his interventionist inclinations, was not able to convince President Harding to intervene rapidly enough; by the time Harding was persuaded to intervene, the depression was already over, and prosperity had arrived. When the stock market crash arrived in October, 1929, Herbert Hoover, now the president, intervened so rapidly and so massively that the market– adjustment process was paralyzed, and the Hoover–Roosevelt New Deal policies managed to bring about a permanent and massive depression, from which we were only rescued by the advent of World War II. Laissez-faire—a strict policy of non-intervention by the government —is the only course that can assure a rapid recovery in any depression crisis.”

“The Wall Street collapse of September–October 1929 and the Great Depression which followed it were among the most important events of the twentieth century. They made the Second World War possible, though not inevitable, and by undermining confidence in the efficacy of the market and the capitalist system, they helped to explain why the absurdly inefficient and murderous system of Soviet communism survived for so long. Indeed, it could be argued that the ultimate emotional and intellectual consequences of the Great Depression were not finally erased from the mind of humanity until the end of the 1980s, when the Soviet collectivist alternative to capitalism crumbled in hopeless ruin and the entire world accepted there was no substitute for the market. (…) We now see, thanks to Rothbard’s insights, that the Hoover– Roosevelt period was really a continuum, that most of the “innovations” of the New Deal were in fact expansions or intensifications of Hoover solutions, or pseudo-solutions, and that Franklin Delano Roosevelt’s administration differed from Herbert Hoover’s in only two important respects—it was infinitely more successful in managing its public relations, and it spent rather more taxpayers’ money. And, in Rothbard’s argument, the net effect of the Hoover–Roosevelt continuum of policy was to make the slump more severe and to prolong it virtually to the end of the 1930s. The Great Depression was a failure not of capitalism but of the hyperactive state.”

Seminar: The Failure of the Keynesian State
course by MISES
added 12 years ago Start Course 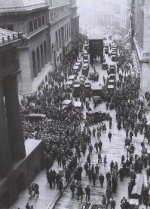 The Great Depression: What We Can Learn From It
course by MISES taught by Thomas Woods, Jr.
added 13 years ago Start Course
Showing 3 of 3 courses. See All