By 1000 BC, the ancient civilizations were using technologies that would form the basis of the various branches of chemistry. Extracting metal from their ores, making pottery and glazes, fermenting beer and wine, making pigments for cosmetics and painting, extracting chemicals from plants for medicine and perfume, making cheese, dying cloth, tanning leather, rendering fat into soap, making glass, and making alloys like bronze.

Philosophical attempts to explain the nature of matter and its transformations failed. The protoscience of alchemy also failed, but by experimentation and recording the results set the stage for science. Modern chemistry begins to emerge when a clear distinction is made between chemistry and alchemy by Robert Boyle in his work The Sceptical Chymist (1661). Chemistry then becomes a full-fledged science when Antoine Lavoisier develops his law of conservation of mass, which demands careful measurements and quantitative observations of chemical phenomena. So, while both alchemy and chemistry are concerned with the nature of matter and its transformations, it is only the chemists who apply the scientific method. The history of chemistry is intertwined with the history of thermodynamics, especially through the work of Willard Gibbs. 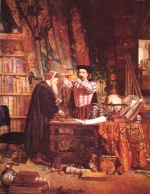