The Greek and Hellenistic contribution, influenced as it was by Egyptian and Babylonian mathematics, is generally considered the most important for greatly refining the methods (especially the introduction of mathematical rigor in proofs) and expanding the subject matter of mathematics. Islamic mathematics, in turn, developed and expanded the mathematics known to these ancient civilizations. Many Greek and Arabic texts on mathematics were then translated into Latin, which led to further development of mathematics in medieval Europe.

From ancient times through the Middle Ages, bursts of mathematical creativity were often followed by centuries of stagnation. Beginning in Renaissance Italy in the 16th century, new mathematical developments, interacting with new scientific discoveries, were made at an ever increasing pace, and this continues to the present day. 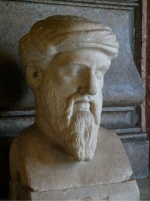 The History of Mathematics
course by UNSW taught by N.J. Wildberger
added 11 years ago Start Course
Showing 1 of 1 courses. See All