Latin America (Spanish: América Latina or Latinoamérica; Portuguese: América Latina; French: Amérique latine) is a region of the Americas where Romance languages (i.e., those derived from Latin) – particularly Spanish and Portuguese, and variably French – are primarily spoken.[2][3] Latin America has an area of approximately 21,069,501 km² (7,880,000 sq mi), or almost 3.9% of the Earth's surface (14.1% of land surface area.). As of 2008, its population was estimated at more than 569 million.

The idea that a part of the Americas has a cultural affinity with the Romance cultures as a whole can be traced back to the 1830s, in particular in the writing of the French Saint-Simonian Michel Chevalier, who postulated that this part of the Americas were inhabited by people of a "Latin race," and that it could, therefore, ally itself with "Latin Europe" in a struggle with "Teutonic Europe," "Anglo-Saxon America" and "Slavic Europe."[4] The idea was later taken up by Latin American intellectuals and political leaders of the mid- and late-nineteenth century, who no longer looked to Spain or Portugal as cultural models, but rather to France.[5] The actual term "Latin America" was coined in France under Napoleon III and played a role in his campaign to imply cultural kinship with France, transform France into a cultural and political leader of the area and install Maximilian as emperor of Mexico.[6] In contemporary usage:

* In one sense, Latin America refers only to those territories in the Americas where the Spanish or Portuguese languages prevail: Mexico, most of Central and South America, and in the Caribbean, Cuba, the Dominican Republic, and Puerto Rico. Latin America is, therefore, defined as all those parts of the Americas that were once part of the Spanish and Portuguese Empires. [7]

* Often, particularly in the United States, the term more broadly refers to all of the Americas south of the United States; thus, English-speaking countries such as Belize, Jamaica, Barbados, Trinidad and Tobago, Guyana, Antigua and Barbuda, St. Lucia, Dominica, Grenada, St. Vincent and the Grenadines, and the Bahamas, as well as Haiti and Martinique, Guadeloupe, French Guiana, the Netherlands Antilles, Aruba and Suriname are included. (Nevertheless, in this use, it is noted that in the Netherlands Antilles and Aruba, Papiamento – a predominantly Iberian–derived creole language – is spoken by the majority of the population.) This definition emphasizes a similar socioeconomic history of the region, which was characterized by formal or informal colonialism, rather than cultural aspects. (See, for example, dependency theory.)[8] As such, some sources avoid this oversimplification by using the phrase "Latin America and the Caribbean" instead, as in the United Nations geoscheme for the Americas.[9][10][11]

* In a more literal definition, which remains faithful to the original usage, Latin America designates all of those countries and territories in the Americas where a Romance language (i.e., languages derived from Latin, and hence the name of the region) is spoken: Spanish, Portuguese, and French, and the creole languages based upon these. Although French-influenced areas of the Americas would include Quebec, this region is rarely considered to be part of Latin America, since its history, distinctively North American culture and economy, and British-inspired political institutions are generally deemed too closely intertwined with the rest of Canada.[12]

The distinction between Latin America and Anglo-America (or, in some uses, North America), which can be criticized for stressing only the European heritage of these regions (that is, for Eurocentrism), is a convention based on the predominant languages in the Americas by which Romance-language and English-speaking cultures are distinguished. Neither area is culturally or linguistically homogenous; in substantial portions of Latin America (e.g., highland Ecuador, Bolivia, Guatemala, and Paraguay), American Indian cultures and, to a lesser extent, Amerindian languages, are predominant, and in other areas, the influence of African cultures is strong (e.g., the Caribbean basin—including parts of Colombia and Venezuela—and the coastal areas of Ecuador and Brazil).

Latin America can be subdived into servel subregions based on geopgraphy, politics, demographics and culture; some subregions are the Southern Cone, Central America, Meso America and Andean states.

3. "Latin America." The New Oxford Dictionary of English. Pearsall, J., ed. 2001. Oxford, UK: Oxford University Press; p. 1040: "The parts of the American continent where Spanish or Portuguese is the main national language (i.e. Mexico and, in effect, the whole of Central and South America including many of the Caribbean islands)." 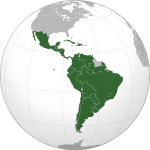