Positivism is an epistemological perspective and philosophy of science which holds that the only authentic knowledge is that which is based on sense experience and positive verification. Though the positivist approach has been a 'recurrent theme in the history of western thought from the Ancient Greeks to the present day' and appears in Ibn al-Haytham's 11th Century text Book of Optics, the concept was developed in the early 19th century by the philosopher and founding sociologist, Auguste Comte. As an approach to the philosophy of science deriving from Enlightenment thinkers like Pierre-Simon Laplace (and many others), Comte saw the scientific method as replacing metaphysics in the history of thought, and observed the circular dependence of theory and observation in science. Sociological positivism was later expanded by Émile Durkheim as a foundation to social research. At the turn of the 20th century the first wave of German sociologists, including Max Weber and Georg Simmel, rejected the doctrine, presenting antipositivist sociology.

In the early 20th century, logical positivism—a stricter version of Comte's basic thesis but a broadly independent movement— sprang up in Vienna and grew to become one of the dominant movements in Anglo-American philosophy and the analytic tradition. Logical positivists (or 'neopositivists') reject metaphysical speculation and attempt to reduce statements and propositions to pure logic. In psychology, a descriptive positivistic approach in the vein of Francis Bacon and Ernst Mach that in many ways departed with logical positivism was set forth by B.F. Skinner in The Behavior of Organisms.

The positivist perspective has been associated with 'scientism'; the view that the methods of the natural sciences may be applied to all areas of investigation, be it philosophical, social scientific, or otherwise. Among most social scientists and historians, logical positivism has long since fallen out of favor. Today, practitioners of both social and physical sciences recognize the distorting effect of observer bias and structural limitations. This scepticism has been facilitated by a general weakening of deductivist accounts of science by philosophers such as Thomas Kuhn, and new philosophical movements such as critical realism and neopragmatism. Positivism has also been espoused by 'technocrats' who believe in the inevitability of social progress through science and technology. The philosopher-sociologist Jürgen Habermas has critiqued pure instrumental rationality as meaning that scientific thinking becomes something akin to ideology itself.

Positivists are guided by five principles:

1. The unity of the scientific method – i.e., the logic of inquiry is the same across all sciences (social and natural).

2. The goal of inquiry is to explain and predict. Most positivists would also say that the ultimate goal is to develop the law of general understanding, by discovering necessary and sufficient conditions for any phenomenon (creating a perfect model of it). If the law is known, we can manipulate the conditions to produce the predicted result.

3. Scientific knowledge is testable. Research can be proved only by empirical means, not argumentations. Research should be mostly deductive, i.e. deductive logic is used to develop statements that can be tested (theory leads to hypothesis which in turn leads to discovery and/or study of evidence). Research should be observable with the human senses (arguments are not enough, sheer belief is out of the question). Positivists should prove their research using the logic of confirmation.

4. Science does not equal common sense. Researchers must be careful not to let common sense bias their research.

5. The relation of theory to practice – science should be as value-free as possible, and the ultimate goal of science is to produce knowledge, regardless of any politics, morals, or values held by those involved in the research. Science should be judged by logic, and ideally produce universal conditionals:

* Statements must be true for all times and places.

Logical positivism grew from the discussions of a group called the "First Vienna Circle" which gathered at the Café Central before World War I. After the war Hans Hahn, a member of that early group, helped bring Moritz Schlick to Vienna. Schlick's Vienna Circle, along with Hans Reichenbach's Berlin Circle, propagated the new doctrines more widely in the 1920s and early 1930s. It was Otto Neurath's advocacy that made the movement self-conscious and more widely known. A 1929 pamphlet written by Neurath, Hahn, and Rudolf Carnap summarized the doctrines of the Vienna Circle at that time. These included: the opposition to all metaphysics, especially ontology and synthetic a priori propositions; the rejection of metaphysics not as wrong but as having no meaning; a criterion of meaning based on Ludwig Wittgenstein's early work; the idea that all knowledge should be codifiable in a single standard language of science; and above all the project of "rational reconstruction," in which ordinary-language concepts were gradually to be replaced by more precise equivalents in that standard language.

In the early 1930s, the Vienna Circle dispersed, mainly because of fascist persecution and the untimely deaths of Hans Hahn and Schlick. The most prominent proponents of logical positivism emigrated to the United Kingdom and to the United States, where they considerably influenced American philosophy. Until the 1950s, logical positivism was the leading school in the philosophy of science. After moving to the United States, Carnap proposed a replacement for the earlier doctrines in his Logical Syntax of Language. This change of direction and the somewhat differing views of Reichenbach and others led to a consensus that the English name for the shared doctrinal platform, in its American exile from the late 1930s, should be "logical empiricism." 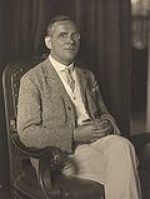 Moritz Schlick, the founding father of logical positivism and the Vienna Circle.