States of Matter are the different forms taken by substances according to the kind of bonding presented by their elements and the physical form of the matter. Typically, the four states of matter are:

Liquid, where a fluid that has its particles loose being free to form a distinct surface at the boundaries of its bulk material. The surface is a free surface where the liquid is not constrained by a container.

Solid is the state of matter characterized by resistance to deformation and changes of volume. In other words, it has high values both of Young's modulus and of shear modulus; this contrasts e.g. with a liquid, which has a low shear modulus.

Gas is the state in which matter expands to occupy whatever volume is available. Theoretically, in the perfect gaseous state matter has its particles working independently, with no interaction with other particles.

Plasma is the state of matter that occurs when a gas is highly ionized at elevated temperatures. The ionic interactions generated under this condition create intermolecular forces with distinct properties from the gas state. 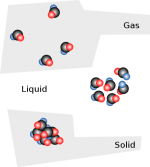