Discovery's flight delivered supplies and equipment to the International Space Station. Inside the shuttle’s cargo bay is the Leonardo Multi-Purpose Logistics Module (MPLM), a pressurized "moving van" that will be temporarily installed to the station. The module will deliver science and storage racks, a freezer to store research samples, a new sleeping compartment and the COLBERT treadmill. The 13-day mission will include three spacewalks to replace experiments outside the European Space Agency’s Columbus laboratory, and install a new ammonia storage tank and return the used one. Ammonia is used to move excess heat from inside the station to the radiators located outside. Discovery also will deliver a new crew member and bring back another after almost two months aboard the space station.

The patch represents the hardware, people and partner nations that contribute to the flight. Discovery is shown in the orbit configuration with the MPLM Leonardo in the payload bay. Earth and the space station wrap around the Astronaut Office symbol reminding us of the continuous human presence in space. The names of the crew border in an unfurled manner.

The banner also contains the U.S. and Swedish flags representing the countries of the STS-128 crew.

- Veteran of one spaceflight

- Married with one child

- Last station astronaut to be rotated on shuttle

- Veteran of one spaceflight 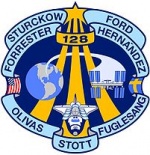 The STS-128 patch symbolizes the 17A mission and represents the hardware, people and partner nations that contribute to the flight. The space shuttle Discovery is shown in the orbit configuration with the Multi-Purpose Logistics Module (MPLM) Leonardo in the payload bay.