World War I, also known as the First World War, the Great War, and the War to End All Wars, was a global military conflict which involved the majority of the world's great powers, organized into two opposing military alliances: the Entente Powers and the Central Powers. Over 70 million military personnel were mobilized in one of the largest wars in history. In a state of total war, the major combatants fully placed their scientific and industrial capabilities at the service of the war effort. Over 15 million people were killed, making it one of the deadliest conflicts in human history.

The proximate cause for the war was the 28 June 1914 assassination of Archduke Franz Ferdinand of Austria, heir to the Austro-Hungarian throne, by a Serbian nationalist, Gavrilo Princip. Austria-Hungary's resulting demands against the Kingdom of Serbia led to the activation of a series of alliances which within weeks saw all of the major European powers at war. As a consequence of the global empires of many European nations, the war soon spread worldwide.

By the war's end, four major imperial powers—Germany, Russia, Austria-Hungary, and the Ottoman Empire—had been militarily and politically defeated, with the latter two ceasing to exist as autonomous countries. The revolutionized Soviet Union emerged from the Russian Empire, while the map of central Europe was completely redrawn into numerous smaller states. The League of Nations was formed in the hope of preventing another such conflict. The European nationalism spawned by the war, the repercussions of Germany's defeat, and the Treaty of Versailles would eventually lead to the beginning of World War II in 1939.

In the 19th century, the major European powers had gone to great lengths to maintain a "balance of power" throughout Europe, resulting in a complex network of political and military alliances throughout the continent. The first of these major alliances formed in 1879, when the German Empire and Austria-Hungary signed treaties creating the Dual Alliance, seen as a method of combating Russian influence in the Balkans as the Ottoman Empire continued to weaken. In 1882, this alliance was expanded to include Italy in what became the Triple Alliance. European conflict was averted largely due to a carefully planned network of treaties between the German Empire and the remainder of Europe—orchestrated by Chancellor Otto von Bismarck. Bismarck's system of alliances was gradually deconstructed following the coronation of Kaiser Wilhelm II, with treaties between Germany and Russia ending in 1890. Two years later the Franco-Russian Alliance was signed to counteract the force of the Triple Alliance. In 1907, the British Empire joined France and Russia, signaling the beginning of the Triple Entente.

As German industrial power grew, Kaiser Wilhelm II devoted significant economic resources to the Kaiserliche Marine, established by Admiral von Tirpitz, in order to be capable of rivaling the Royal Navy. As a result, both nations strove to outbuild each other in terms of capital ships. With the launch of HMS Dreadnought in 1906, the British Empire gained a significant advantage over their German rivals. The arms race between Britain and Germany eventually extended to the rest of Europe, with all the major powers devoting their industrial base to the production of the equipment and weapons necessary for a pan-European conflict. Between 1908 and 1913, the military spending of the European powers increased by 50%. In 1909, Austria-Hungary annexed Bosnia-Herzegovina from the Ottoman Empire, greatly angering the Russian Romanov Dynasty and the Kingdom of Serbia, as Bosnia-Herzegovina contained a significant Slavic Serbian population. Russian political maneuvering in the region destabilized peace accords that were already fracturing in what was known as "the Powder keg of Europe". In 1913, the First Balkan War was fought between the Balkan League and the fracturing Ottoman Empire. The resulting Treaty of London further shrank the Ottoman Empire, creating an independent Albanian State while enlarging the territorial holdings of Bulgaria, Serbia and Greece. When Bulgaria attacked both Serbia and Greece on 16 June 1913 it lost all of Macedonia to Serbia and Southern Dobruja to Romania in the 33–day Second Balkan War, further destabilizing the region.

On 28 June 1914, Gavrilo Princip, a Bosnian-Serb student and member of Young Bosnia, assassinated Archduke Franz Ferdinand of Austria in Sarajevo. Suspecting Serbian involvement in the assassination, Austria-Hungary delivered the July Ultimatum to Serbia, a series of ten demands aimed at diplomatically undermining Serbia. When Serbia acceded to eight of the ten demands levied against it in the ultimatum, Austria-Hungary declared war on Serbia on 28 July 1914. The Russian Empire, unwilling to allow Austria-Hungary to eliminate its influence in the Balkans, ordered a partial mobilization one day later. When the German Empire began to mobilize on 30 July 1914, France—sporting significant animosity over the German conquest of Alsace-Lorraine during the Franco-Prussian War—ordered French mobilization on 1 August. Germany declared war on Russia the same day. 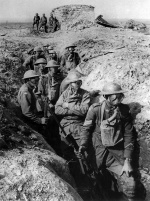